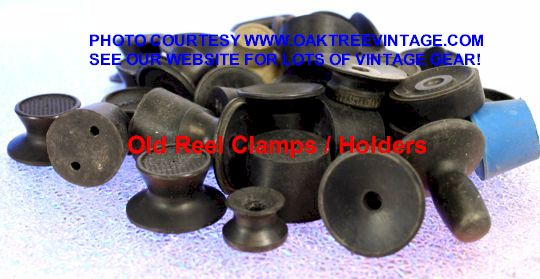 Old, originals are invariable going to be 'slick' and / or have enlarged holes that will not grip the spindle safely / sufficiently anymore.  We know, as we have dozens of originals (a few of which are shown above), none of which work well enough to use / trust anymore. Our new / fresh ones are great to replace your old, dried out / cracked or lost ones.
As these are individually, 'hand made' at our shop, they will have slight variances one from the other and from photos in 'cosmetics / finish'.
They will not likely be 'perfect' cosmetically. If you're looking for "cosmetic perfection", then these won't likely be to your standards, however, they will FUNCTION "PERFECTLY" on most machines. 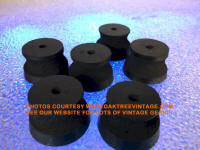 These are new rubber and will grip well.
We are also offering an extra pair (when ordered with the first) of 'cosmetic seconds' (often look in similar condition to the 'firsts') for an additional $14.50.

**International / 'non-US' locations will add $6.51 for shipping shown in the 'drop-down' selection below.

Additional PAIR will add $14.50 to either "Domestic / USA" or "International" options shown in the 'drop-down' selection below.

Orders for this product taken by Phone vs via the "Buy Now" button will incur a $5.00 surcharge.

* Still best to use Sony decks in horizontal mode unless you have the original Sony Rubber clamps as they are slightly different w/ a 'wire' clip imbedded inside rubber. These stoppers will work with Sony's when used in horizontal position or 'tilted back at an angle' and if you're 'attentive' while operating the deck, in the 'vertical' position as well.

These are new rubber and will grip well. No, they're not simply the 'hardware store supply' stoppers. Those are NOT the correct rubber consistency to modify, the correct overall diameter, nor would the hole diameter be correct, nor 'run-out free'.

If your Sony has a ‘Philips’ screw head in the center / tip of the reel spindle, then you need the ones that were made specifically for those Sony models, then it's still best to use Sony decks in horizontal mode unless you have the original Sony Rubber clamps as they are slightly different w/ a 'wire' clip imbedded inside rubber. Again, the indicator that your deck needs these is a Philips screw in the center / tip of the spindle. These stoppers will work with Sony's when used in horizontal position and if you're 'attentive' while operating the deck, in the 'vertical' position as well.
Unfortunately the 'original' reel stoppers are no longer available for any of the tape deck manufacturers. These are units that we make here at our shop. While functionally, they work perfectly, cosmetically they will not be 'perfect', nor a 'beautiful' as the originals were. They're what we ship with our restored decks as well
The 'Additional'** pair at the discounted price will be our 'cosmetic blems' and / or will have a bit more 'wobble / run-out', but again, will be functional.


"Hi Jerry, The vintage-style hub clamps arrived yesterday and they are perfect! Thank you for doing them as they are exactly what I was hoping for. Great, fast service.
Thank you. Have a great weekend. Best, Lee"